How to make a cardboard lampshade 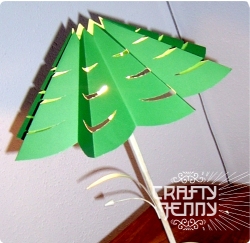 Learn how to make a lampshade entirely out of cardboard! This is a very easy project which requires only one sheet of cardboard and uses folding techniques to create the form.

A few pics followed by the write-up

Step 1: Mark and cut a large circle
Using a compass, draw the largest circle possible using the entire width of the cardboard. For this project we managed a circle with a diameter of 19 inches (483mm).

Then make a smaller circle with a diameter of 2 inches (50mm) starting from the same center point.

Cut out the large circle.

Step 2: Folding your cardboard circle
Place your cardboard circle on a flat surface. You will be making several folds on this side of the card. First fold your circle in half horizontally. Then make a fold vertically. (This will make a shape of a cross). Line up the folds each time you bend the card to make your folds perfect equal angles from each other.

Now make two more folds in between the spaces, so each fold is 45 degrees.

Next turn your cardboard over and make another four folds (just as you did previously) but in between the last angles.

Your cardboard circle will now have 16 areas, each with 22.5 degree angles. And each inner fold will be followed by an outer fold, giving a concertina effect.

Step 3: Cut out the inner circle
Now fold the circle in half so you can see the outline of the smaller inner circle you drew earlier. Cut out this semicircle - when you open it up you will have a full circle cut-out.

Step 4: Shape the edges of each panel
Create a shape you like for the edge of the lampshade and draw it in pencil for cutting.

To make sure each part was even, we cut one folded section at a time, and then we used what shape as a pattern to trace onto the following section, cut that out, and so on.

Step 5: Shape the inner circle edges of the circle
Create a shape you like for the top part of the lamp shade and draw it in pencil first. Once it's perfect, cut it out.

Step 6: Cut out designs in each panel
Next we designed patterns to cut along the spine of each outer fold to create a nice effect and allow light to shine through. Cut four spines at a time, then use the cut-out as a pattern to trace and cut the remaining shapes.

Step 7: Attach to top of lamp
Finally open up your lampshade to see what you have created!

Attach your lampshade frame to its base. Run a ring of PVA glue around the top and slightly outer side of the top ring of the original lampshade frame.

Place your cardboard lampshade on top. As it is a circle, it should automatically form an even shape around the lampshade frame. Adjust slightly to make sure all is level and even. Allow to dry and there you have it: an extremely easy to make lampshade!

We suggest you use a 40watt lamp for this project.